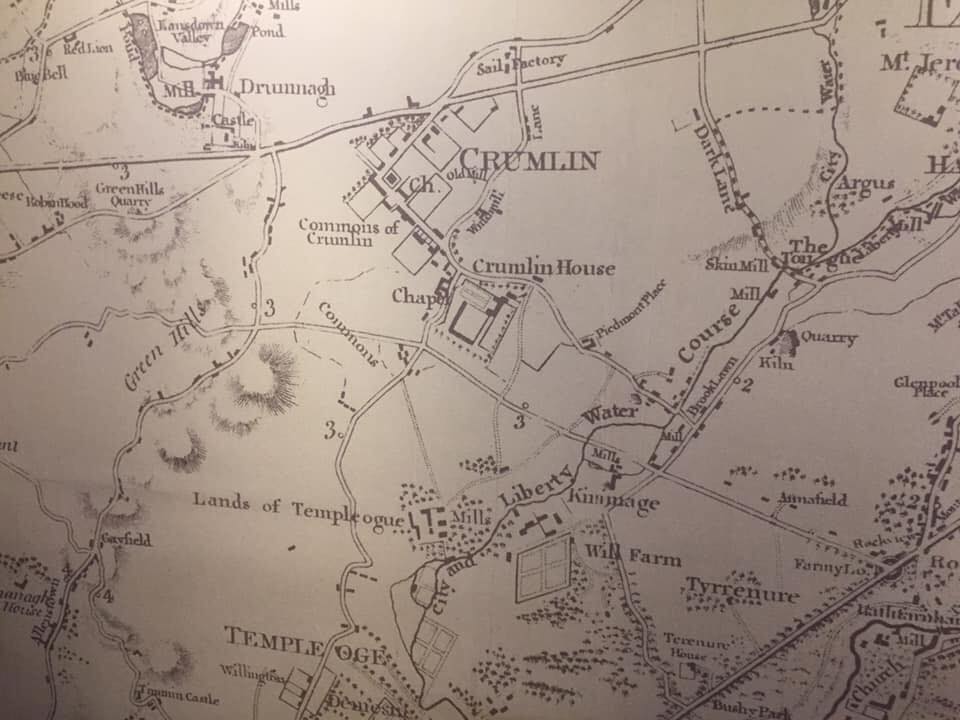 Druimneach – A Country with ridges – where a Neolithic settlement was discovered but has since been demolished and a funerary bowl found in a burial site which is now on view in the National Museum.

The lands of Drimnagh were taken from their Irish owners by Strongbow, who gave them to Hugh de Barnwell, the only survivor of the Barnwell family, who had arrived in Ireland with Strongbow in 1167 and had settled in Berehaven in Munster but were murdered by the Irish living in the Dublin Mountains.

Abigail Rieley, Writer and Author describes the Heritage of Drimnagh Castle so vividly in her Dublin Stories : The Haunted Dustpan

According to Lewis’s Topographical Dictionary of Ireland, 1837.

DRIMNAGH, or DRIMNA, was a parish (formerly), in the Barony of UPPERCROSS, County of DUBLIN, and of the province of LEINSTER, which was two miles (W. S. W.) from Dublin, on the road to Naas and on the Grand Canal.

As stated, a paper-mill stood at Lansdowne Valley; and near Bluebell stood a woollen mill. In the direction of Crumlin stands Drimna Castle, formerly the head of a manor, of which the Barnewall family were Lords from the time of John to that of James. I., and which was a place of some consequence in the reign of Chas. I. It was described as the property of the Marquess of Lansdowne, and occupied, by Mr. E. Cavanagh. The church was in ruins at that time.

Up until the mid 1930’s Drimnagh was farmland when some city centre residents moved from dilapidated tenements to series of terraced and semi-detached houses in roads named after the mountain Ireland.

The suburb consisted of lands close to Drimnagh Castle and Lansdowne Valley stretching across to the north east boundary of the Grand Canal.

In 1943, three-bedroom private houses were built by Associated Properties along the southwest side of Drimnagh whilst the larger section to the northeast was built up by Dublin Corporation and consisted of three bedroom ‘Kitchen Houses’ and two bedroom ‘Parlour Houses’. The two areas meet at the parish church, the Church of Our Lady of Good Counsel.

The Dublin Corporation housing area was originally considered part of an area known as North Crumlin from its construction in the mid-1930s until the introduction of the postal code system during the mid-1970s.

The closure of Drimnagh Paper Mills in 1948 raised a question amongst Irish politicians in the Dáil. Approximately, 100 workers were let go from the jobs where they utilised the Grand canal waterways, created the well known Erin stationery.